Do some research into contemporary street photography. Helen Levitt, Joel Meyerowitz, Paul Graham, Joel Sternfeld and Martin Parr are some good names to start with, but you may be able to find further examples for yourself. What difference does colour make to a genre that traditionally was predominantly black and white? Can you spot the shift away from the influence of surrealism (as in Cartier-Bresson’s work)? How is irony used to comment on British-ness or American values? Make notes in your learning log.

It looks so easy doesn’t it?  You just choose your street, wait for something bizarre to happen then press the button…. odd things are occurring all the time out there, you can’t move for people wearing dogs on their heads and lugging obscure shopfittings hither and yon. From the plethora of street images to be found online you’d find it difficult to disagree with that.  But actually doing it is another matter.

A certain amount of preparation helps, as Henri Cartier-Bresson discovered.  Choosing your spot and waiting patiently for the unwitting pedestrians to arrange themselves into a satisfactory composition can be a productive strategy, one which Cartier-Bresson employed regularly.  But probably the most successful approach is to simply do the legwork, and lots of it.

I’ve collected what I think are some representative samples of contemporary street photography below. The work of Nils Jorgensen  [http://in-public.com/photographers/nils-jorgensen/]

Street signs and billboards offer rich pickings for many street photographers.  These are almost ready-mades in their execution, but still capable of raising a wry smile.  At risk of stating the obvious, they work by placing two elements in the frame which ‘talk’ to each other in gesture, action or potential movement.

Here’s Nick Turpin doing much the same thing, this time in colour: The work of Nick Turpin [http://in-public.com/photographers/nick-turpin/] The work of Nick Turpin [http://in-public.com/photographers/nick-turpin/]

As did  Michael Wolf in his series “Tokyo Compression”, part of his “Life in Cities” project: Wish I’d thought of that.  Such a simple idea and such a rich vein of imagery.  There are a number of common themes in street photography which get revisited over and over.  The poster/street sign combination as seen above; the ‘where’s my head’ style; the ‘what’s that doing there’  style and various others.

Colour or Black and White

Street photography started in black and white and stayed that way for decades,  because although colour film was available in retail form from 1936  (Agfa’s Agfacolour Neu) the material was expensive, difficult to process (compared to b/w) and was available only in low ISO ratings.  The advent of smaller more discreet cameras made street work more agile and later colour emulsions developed in the late ‘50s made colour street photography a practical proposition.  Early adopters were Saul Leiter (US 1923-2013) and Fred Herzog (Germany 1930): 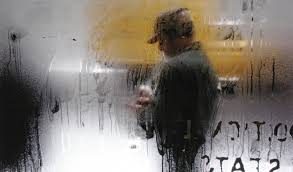 Leiter’s work from the early ‘60s clearly resonating with Nick Turpin and Michael Wolf (above).  Whereas black and white street photography must rely on form and geometry to convey its content, colour adds another channel of perception.  My personal view is that the colour itself sometimes becomes the element which fixes the eye, distracting the viewer from the relationship of forms within the frame.  Certainly colour itself can be the defining aspect of an image but for me this is a bit of a one-trick pony.  For all its promise, colour can sometimes end up hiding content rather than exposing it.  But plenty of street images are effective because they are in colour, as are many b/w examples.

Surrealism is alive and well in modern street photography in the sense of an exploration of the absurd and bizarre.  For many current practitioners the dog-on-the-head shot is the holy grail of their oeuvre, keenly anticipated around every street corner.  I don’t think the pursuit of this type of image is a direct result of Surrealist influence, but the processes which drive it may well have similarities with those which preoccupied the Surrealists.

Irony usually requires the use of contrary elements which doesn’t come easily to the two dimensional image – it’s a device more suited to verbal or performance expression.  The idea of dramatic irony, though, is perfectly suited to the still image.  In this form, originally a device of Greek tragedy, the audience is aware of the import of a character’s actions or behaviour of which they themselves are blissfully ignorant.

There’s a fine line between wry irony and ridicule;  the passage of time helps to broaden that line but in more recent images it can become somewhat uncomfortable, perhaps arousing feelings of guilty voyeurism in the viewer.  Martin Parr must be mentioned here:

In the image above Parr offers us a rather unedifying view of the English on holiday.  I admire Parr’s work but I am a little uncomfortable with the Dancing Bear problem – not enough to disregard his work though.  The viewer’s reaction to work like this could be a direct measure of their socio-economic position.  It would be interesting to hear the opinions of those appearing in the photograph and I wonder what those appearing in the rest of the book thought.  Perhaps it is more an observation on the British seaside experience than on those depicted.  That could easily be me in the doorway, leaving with an armful of chip trays and wondering if I fulfilled all the sauce requests correctly.