“My work is about a build-up of images, often in sequences. There is a connection between them all. Basically, I’m a one-trick pony: it’s all life and death and that’s it.”  The Guardian. https://www.theguardian.com/artanddesign/2010/apr/21/photography-nigel-shafran-best-shot (accessed October 3, 2017).

I think Shafran was being a little disingenuous here.  He doesn’t seriously consider himself a pony of any kind, least of all one with a limited expressive range.  He takes his own work very seriously and embarks upon projects which at first may seem to hold no promise, but by rendering his chosen subjects as photographs he transcends the quotidian, presenting sets of images which are allowed their own voice.

Charlotte Cotton said as much:

“CC I’m very suspicious of the idea of ‘non-subjects’ in photography, I don’t think there are such things. As in the case of Washing-up 2000, there are subjects that are not very obviously subjects until they are photographed, regardless of whether that was the intention of the photographer or not. There is a feeling that the significance of our lives is implanted in these subtle and everyday occurrences. RulhBook has that same feeling, that you build ideas about this life and the story that is being told.” Interview with Charlotte Cotton, edited photographs : Nigel Shafran. http://nigelshafran.com/interview-with-charlotte-cotton-edited-photographs/ (accessed October 3, 2017).

And on Shafran’s website he quotes The Tate’s opinion thus:

The high production values of this work together with the artist’s deep interest in the commonplace, has led to the creation of melancholic portraits of people and places.

I understand that he made this work on large format film but I can’t say it’s immediately apparent;  the ‘production values’, such as they are, are very restrained.  It appears that there has been very little production value invested in any of the photographs but perhaps that’s the point – he spent ages making it look like he spent no time at all.  We’ll never know.

We can’t help being interested in the contents of the work though.  Most of us have an area of home which serves a similar purpose and noting how the objects differ from or resemble our own is irresistible.  There are intriguing elements too – the letters N and R taped above the taps, what’s that about?  гарачы means hot in Belarusian and прастуда means cold – do they have an eastern European nanny? Is Mrs Shafran from Belarus? The letters are missing in some of the images, but not in sequence – are we to assume that they have been removed then re-applied? Or does this mean that the images are not chronological – no reason to suppose they are, of course.

There are many similar conundrums in other images – what is plugged into the cooker socket and why is it sometimes switched on – but there’s no visible effect?  Do these people not own any tea-towels?  These are photographs of evidence, the signs arising from occupation and everyday living.  If so inclined, the astute observer could doubtless glean numerous details of life chez Shafran.

In the coursebook we are invited to offer an opinion on the artists gender. I was not the least bit surprised it was taken by a man and I am baffled by the suggestion. Is it because the photographs depict a domestic chore? Is there some kind of gender role-alignment inferred? The question appears utterly specious but maybe I’ve missed something.  The contribution made by gender to the creation of an image is difficult to detect.  For any assertion that it does make a difference I’m confidant that others could be easily found to contradict.  So no, I don’t think it does.

The absence of people alters the way the viewer may see the photographs by allowing quiet consideration, free from the interference of another sentient form.  The items, as I mentioned above, are allowed to speak for themselves.  There is no domestic action going on, whatever has happened recently vis-a-vis washing up has ended and we are presented with the result of the effort.  We are also treated to a faux info-caption where the objects mentioned therein are conspicuously absent from the image; they have been washed-up. Ho ho.

This and other work by Shafran holds a peculiar interest.  It’s all so matter-of-fact, so plain, ordinary and unremarkable until it is photographed,  at which point the viewer gaze begins to allow the image to mature under contemplation. This reminds me of Gary Winogrand who wanted to take pictures to ‘see how things looked photographed’.

Of the two images below, the first is from Shafran’s “Ruth on the Phone” series, the other is of Marianne Ilse from the Leonard Cohen album “Songs from a Room”.  I don’t suppose there is the slightest influence at work here but I was struck by the similarities. 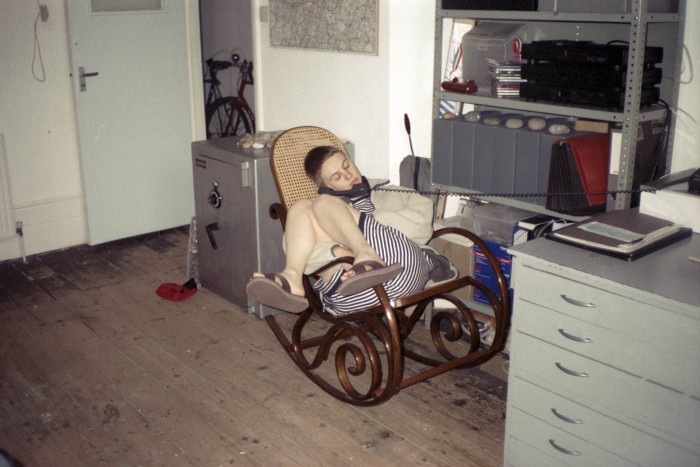